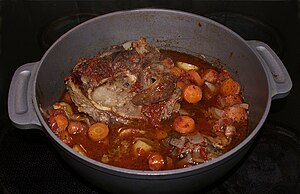 Ossobuco, when loosely translated from Italian, means hollowed bone; a reference to the large piece of marrow in the center of the veal shank bone.[1][2] It's a Milanese specialty of veal shanks cooked in meat broth and flavored with white wine.[3] Slowly braised, this relatively tough, yet flavorful cut of meat becomes meltingly tender, and the connective tissues and marrow dissolve into the sauce, making it rich and creamy.

The shank is a relatively cheap cut of veal which is readily available in most good supermarkets and butcher shops. Look for meaty hind-shanks cut from the top of the thigh [4] with a high proportion of meat to bone. Each piece should be about five inches across and one-inch to one-and-a-half inches thick.

This dish probably had its origins in a Milanese farmhouse during the late nineteenth century and most likely did not originally include tomatoes, a New World vegetable.[5] Ossobuco first became popular in the osterie of Milan, which were neighborhood restaurants of Italy's large cities.[5] These catered to the neighborhood's local residents but rarely if ever to tourists and foreigners.[5]

Traditional ossobuco was prepared with cinnamon, allspice, bay leaf and gremolata and today is called ossobuco in bianco (ossobuco in white sauce). The modern version has, by and large, replaced the older one. This new version includes tomatoes and the holy trinity of Italian cooking: carrot, celery and onion, flavored with herbs but no gremolata (although hybrid versions exist which include both tomato and gremolata).

While risotto alla milanese perfectly compliments ossobuco in bianco, for which it was intended, the moister, bolder modern-day version goes better either with polenta or mashed potatoes. [5]

The following recipe is for the modern version.

There are variations to this dish which use other animal shanks, including turkey and venison shanks. The recipe calls for anchovies, which enrich the finished sauce without adding a fishy flavor. Don't omit them, even if you don't like anchovies. Traditionally, the cooking sauce is finished with a mixture of garlic, lemon zest and parsley called gremolata. It adds a burst of freshness to the finished dish. Gremolata consists of the grated zest of one lemon, one finely minced clove of garlic, and one tablespoon of finely chopped parsley. Add this mixture to the sauce at the end of the cooking, as it's being reduced. Ossobuco is almost always served with risotto. It's one of the few examples of Italian cooking where a starch is served with the main course. One may, for a change, substitute orzo or ancini de pepe cooked in meat broth and finished with butter and parmesan cheese.